Institute of Social and Political Psychology > Laboratory of psychology of communication 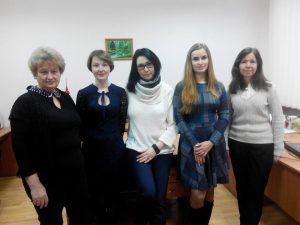 The page is devoted to the activity of the laboratory of psychology of communication, which is a structural unit of the Institute of Social and Political Psychology of the National Academy of Sciences of Ukraine. In recent years, the scientific interest of the team was aimed at creating the scientific foundations of knowledge and development of a practical basis for the management of social dialogues, assisting in the formation and functioning of subjects of social dialogue, which would ensure the effective development of integration processes in society.

The urgency of the study is determined by its direct connection with many of the public tasks posed by modern state-building, and the need for scientific socio-psychological support for the improvement of the state humanitarian policy. Scientific actuality is connected with the insufficient level of development of the scientific basis of expertise and the organization of various social dialogues, their scientific and psychological support, methodological and professional support.

The purpose of the study is to create models and to disclose interdisciplinary mechanisms for the functioning of social dialogues in terms of cognitive communication on the basis of modern psychological knowledge. In 2017, the team of the laboratory began a fundamental scientific work on the development of scientific and methodological approaches to the design of communicative technologies for the settlement of social conflicts. The urgency of the research topic is determined by the urgent need for scientific psychological comprehension of the nature of the relationship between the factors of occurrence and the peculiarities of the manifestation of conflict processes in modern Ukrainian society, the analysis of social conflict as a special phenomenon taking into account the specificity of its development in the conditions of formation of a new social field and development on the basis of theoretical generalizations and empirical conclusions of effective technologies for its settlement. The specificity of contemporary Ukrainian society is the multiplication of professional, ethnic, religious, and cultural contradictions, which predetermines the globalization of psychosocial tension, and aggravation of common contradictions in society.

The main trend in the development of social processes today is the reformatting of traditional social structures and connections and the gradual formation of a qualitatively new type of society organization. Ignoring, freezing such a natural process generates a rise in social tension, inequality, discrimination, and polarization of social groups, which appears to be the main source of real and likely social conflicts. The resolution of such conflicts is possible only with the achievement of consensus through public discussions, open discussion, social dialogue, etc. The construction of communicative technologies for the regulation of social conflicts in the context of social change becomes of particular importance and is a promising area of ​​communication management in general, which makes it possible to apply communicative technologies for resolving social conflicts in the spheres of social activity and to properly manage communicative flows (that is, technologies for the organization of communicative space can be applied in the field of public administration, business, education, institutes seven th, etc.). It is from the qualities of the communicative space that will depend on the effectiveness of the communication itself, the achievement of the goals set before them by some actors of communication processes, trying to resolve the social conflict.